Welcome to the dig diary!

Excavations began around Tinkinswood this week and it’s been very exciting! We have dug trenches in the two possible fallen burial chambers, and dug some test pits in the quarry. So far we have found a number of finds. It’s still hard to tell conclusively what we are dealing with, but our knowledge of the site is already being transformed. Here’s a summary of what’s been going on so far:

What a fantastic first week we have had at Tinkinswood – the sun has shone every day and we are starting to find some interesting archaeology on all three sites under investigation. Trenches across possible Cromlech one, closest to Tinkinswood burial chamber itself, have revealed what looks like stone cairn material made up of smallish boulders and pebbles, with some larger boulders forming a rough arc through the centre of one trench.

Possible chamber 2 being planned by one of our lovely volunteers, Manon Jenkins

At the moment we think this might be some form of structure within the cairn – perhaps walling designed to support the cairn material or the walls of a chamber or cist within the cairn. This possible monument has been quite badly disturbed, with stone probably robbed to build the adjacent field boundary and tree roots penetrating into the stone cairn, and so most of the finds we have made have been fairly modern in date, including glass, pottery and bone dating from the late eighteenth century onwards.

Yesterday, however, Anne (one of our fantastic volunteers) found a small rounded beach pebble that had been used as a hammerstone, probably for flint knapping – our first prehistoric find from this area! We will be continuing to carefully excavate the cairn material and reveal the possible structure over the next few days. Hopefully we will soon know more about the date of the possible monument, what it looked like and what it was used for.

Two trenches have been opened across possible Cromlech 2, in the field adjacent to Tinkinswood Farm, and we already have quite a sizable collection of prehistoric material, including Bronze Age pottery, flakes of worked flint and flint tools of Neolithic date and a Mesolithic microlith (a type of tool that would have been used to make arrows or knives by hunter gatherers). 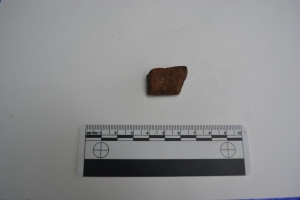 A sherd of Bronze Age pottery from possible chamber 2

The Mesolithic microlith from Chamber 2

The Neolithic scraper from possible chamber 2

Two small fragments of cremated bone have also been found. All of this material has come from the upper surface of the stone cairn that was found just inches below the modern ground surface. 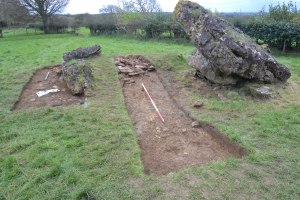 This cairn has been very badly damaged, and only appears to survive on the southern side of the monument. We have been able to identify kerb stones defining the outer edge of the cairn (four of which survive), and the cairn itself was constructed using large slabs and boulders and small pebbles – probably anything that was available locally. No structure has yet been identified, but we have started the slow process of excavating through the cairn material and we hope to have a better idea of how the cairn was built and what it originally looked like very soon. A particularly exciting find was made by Barry (another of our fantastic volunteers) in the trench positioned outside the surviving cairn – a charcoal filled posthole. We have only revealed the top of this so far, but will be excavating it this weekend. Fingers crossed for some Neolithic material!

The possible quarry site (in the woods adjacent to the footpath) is puzzling, not at all what we were expecting! We thought that our test pits would cut through a thin layer of topsoil and subsoil and reveal the top of the bedrock where, we hoped, evidence for the removal of stone to make the Tinkinswood capstone would be found. Instead, we have three very deep test pits and no evidence for stone working!

The quarry site under excavation

One test pit did produce a lovely worked beach pebble – this had two flakes struck from opposite sides of one end and was probably used as a crude chopping tool. It is really difficult to date this tool because it is so crude and it could have been made and used anytime in the prehistoric period. One of the test pits produced an unexpected find late on Wednesday afternoon – an animal burial lying on the top of the natural bedrock. At the moment only the end of two legs are visible but we think it is a sheep or a pig. The bone is fairly old, probably medieval in date. Our fourth test pit is looking more promising, although it is still early days. In this one we have found burnt stones close to one of the possible quarried rock faces – perhaps evidence for fire setting to shatter the stone? This test pit has also produced a small sherd of prehistoric pottery, similar to that found in possible Cromlech 2, so we are hopeful that we have found an area of prehistoric working. This test pit will be continued over the weekend and we will open several more in our continued search for quarrying evidence. 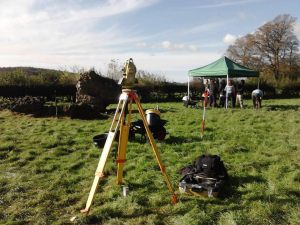 A huge thanks to all our volunteers who have been fantastic this week. We look forward to seeing some of you again and to welcoming new people over the next week. Fingers crossed we have more exciting finds to report next week!

I’m Ffion, Honorary Research Fellow at Cardiff University and Heritage and Arts Manager for Cadw, the historic environment service for the Welsh Government. At Cadw, my role is to oversee projects that link heritage with the arts, inspire new ways of engaging people with our built environment and to link people with their local heritage and archaeology.
View all posts by FfionR »
« Revealing the past through clearance at Tinkinswood
Dig Diary Tuesday 1st November »

8 thoughts on “Welcome to the dig diary!”